Washateria vs Laundromat: What are the Difference & History of each?

Today, when you compare Washaterias to Laundromats, there isn’t a real difference between the two. Both are self-service laundry facilities where you can wash-dry-fold your dirty laundry. However, this was not always the case as in the past they were both brand names and for one, a product name, as well.

In most parts of Modern America, laundry facilities are commonly known as Laundromats but in Texas and other parts of the South they can be referred to as Washaterias. Both terms are interchangeable today but the history and story of each are quite unique and different.

These days, wash & fold laundry service is convenient and stress-free with laundry pickup and delivery being an easy click away for both residential and commercial laundry customers such as Airbnb laundry service at SpinZone Laundry in Austin, TX.

However, in the Great Depression of the early 1930’s, electric washing machines were still in their infancy and their high cost put them out of reach for many Americans. It was not unusual during this time period for laundry to still be done very laboriously with washboards and mangles and then drying done on a clothes line or washing line outside in the sun using clothespins – talk about going green! 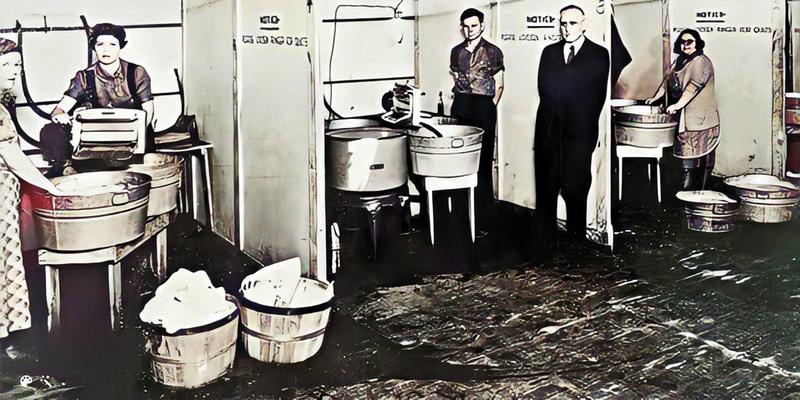 The first self-service laundry facility was known as a Washateria and opened to the public on April 18, 1934 in Fort Worth, TX. This innovative, new self-service laundry room enterprise looked nothing like today’s laundromats as it was equipped with four electric washers that could be rented on an hourly basis, though drying still had to be done the low-tech way at home since electric dryers weren’t available until 1937. As most individuals could not afford to purchase their own electric washing machines, this new industry grew quickly given the difficult and demanding alternative. Coin integration into commercial washers and soon to be invented dryers for additional convenience was years away.

The popularity of Washaterias grew to a chain of hundreds with the brand name “Washateria” becoming synonymous with this new industry. Unfamiliar with the correct spelling of this new enterprise, customers would spell Washateria several ways such as Washeteria, Washiterias (with the dirty word in the middle), Washerias and Washeries but the term Washateria became accepted in the lexicon as both the brand and description of this new industry, or what is called a proprietary eponym or generic trademark, much like Kleenex, Popsicle or Google is today.

It is thought the origins of the word “Washateria” were a blend or combination of the words Wash and Cafeteria, the latter being first used in America in the late 1890’s as a place where individuals would go to get an affordable meal.

The term “Wash-a-teria” was and still is used primarily in southern regions of the United States and was even listed in the Yellow Pages at one time as an official business name. However, that name was eventually changed to Laundries Self-Service.

The term for self-serve laundry facilities started evolving with the popularity of “The Laundromat.”

In 1940, while working for Westinghouse, public relations pioneer George Edward Pendray coined the name “Laundromat,” believed to be derived from a combination of the words laundry and automat – the latter, where simple foods are serviced by vending machines, sometimes in a cafeteria-style environment. It is worth noting he is also responsible for coining the phrase “Time Capsule.”

Pre-World War II, automatic washing machines were becoming commonplace but when the United States entered the war, production of many items, including domestic automatic washers, ceased to help support the war effort. R&D (Research and Development), however, was allowed to continue. Post-war production of washers resumed in 1946 with the latest and greatest technology and a new time-saving automatic washing machine was soon a successful emerging product called the Laundromat for Westinghouse.

Today when we think of a laundromat though we think of a facility to wash our clothes, and not a brand of automatic washing machines sold by Westinghouse, much like Whirlpool, Maytag, LG, Samsung or Speed Queen. This also explains why spell checking software the world over sometimes corrects "laundromat" if spelled with a lower case “l.” It is a proper noun when referring to a Westinghouse washer, but not when used generically to represent a laundry facility.

Westinghouse’s Laundromat was innovative for its time as a front load washer compared to many top load washers of the era. The Laundromat even had features like a scale to weigh the laundry load, which helped to save water as well as save detergent and provide a better, cleaner laundry experience.

Harry Greenwald of Greenwald Industries is credited with inventing the coin meter that would eventually be used on many coin laundry washers and dryers. He approached Westinghouse to combine his coin meter with Westinghouse’s Laundromat washing machine and the modern coin-operated laundromat was born in 1947. With this, stores began to open under the name Laundromat and soon, laundromats (self-service laundry facilities) equipped with Laundromats (Westinghouse’s brand of automatic washing machines) grew in popularity, thanks in part to the coin meter allowing coin laundry facilities to be unattended and making the 24-hour laundromat possible.

As the 1940's wore into the 50's and beyond, Washaterias or any place with self-service automatic washing machines came to be known as a "laundromat." This was partially fueled by other companies trying to capitalize on the laundromat name. Unfortunately, places couldn't officially name themselves this due to the registered Laundromat trademark so they creatively came up with a variety of related names such as: Launderette (popular in the UK), Laundryette, Laundramat, Laundrymat, Laundry Mat, Laundry Matt, Laundermat and Laundreeze.

Today’s Modern Laundromat and the Future of Laundry Service

Although the introduction of coin-laundry helped make possible the unattended 24-hour laundromat, today’s top-of-the-line modern laundromats, like SpinZone Laundry in Austin, are fully-staffed regardless of 24 hours. Attendants help to keep the facility clean and assist customers with questions or issues that may arise. Modern laundromats also feature complimentary Wi-Fi, cell phone charging stations, change machines and bill breakers, soap and supplies, as well as flat-screen TV’s for the big game or your entertainment. Snacks and beverages are offered in a cool, climate-controlled environment, with select locations offering kid’s play areas, arcade games, patios and an Ozone Laundry System to sanitize, disinfect and deodorize you laundry...naturally.

Customers can now rely on SpinZone Laundry for their home laundry service as we offer contactless pickup and delivery laundry service in Austin. Gone are the days of even visiting the laundromat if one wishes. Customers no longer have to “Google” affordable “laundry service near me” as we make the “closest laundromat near me” your front doorstep! Our award winning wash and fold laundry service is easily a click away for residential and commercial customers alike.

As for Laundromat vs Washateria: while many in Southern California and Texas still refer to laundromats as “Washaterias,” other areas of the country historically made their own choices, some of which still exist today.

After the Laundromat brand of washer ceased production, Westinghouse allowed the trademark rights of "Laundromat" to expire in 1993; however, the name stuck and unlike companies such as Kleenex, Popsicle or Google, Washateria and Laundromat are examples of the brands dying but the name living on.